Each year, the First Amendment Foundation solicits nominations for the three awards described below. For 2020, FAF will accept nominations for these awards from April 1st through May 1st. Please send your nomination with a concise description of the work the nominee has done, and why she or he deserves to receive the award to information to pmarsh@floridafaf.org to be received no later than May 1, 2020. Please also clearly indicate which of the three awards you believe your nominee should receive, based on the following award descriptions:

The Pete Weitzel / Friends of the First Amendment Award 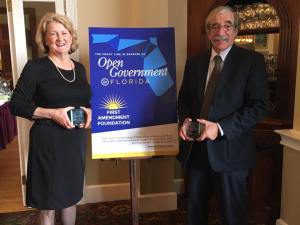 In recognition of Pete Weitzel, founder of the First Amendment Foundation and former senior editor of the Miami Herald, the Foundation annually recognizes one outstanding individual who has made a significant contribution to the fostering of open government in Florida. Eligibility is not limited to members of the press, but is open to anyone… government officials, public employees, and private citizens. 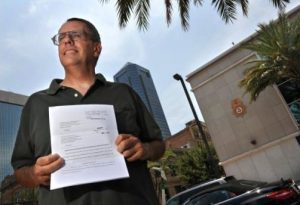 The James C. Adkins/Sunshine Litigation Award was created to recognize the importance and continuing value of Justice Adkins’ open government opinions while on the Florida Supreme Court and is given to a person or an organization in Florida who has made a significant contribution to the cause of furthering open government through litigation. 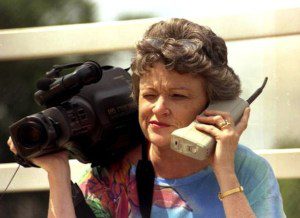 The Lucy Morgan Award for Open Government Reporting is named for Lucy Morgan, the former Pulitzer Prize-winning reporter for the St. Petersburg Times (now the Tampa Bay Times) who broke countless stories using public records. The award honors a Florida journalist who smartly uses public records to report stories exposing corruption, revealing government conflicts of interest or otherwise serving the public interest. The award was created in 2017 and the first winners were announced at FAF’s annual Sunshine Luncheon on January 23, 2018.

TALLAHASSEE – Pamela Marsh, the First Amendment Foundation’s executive director, will become a full-time Visiting Professor of Practice at the University of Florida Levin College of Law for the … END_OF_DOCUMENT_TOKEN_TO_BE_REPLACED

The Eleventh Circuit Court of Appeals affirmed in part an injunction preventing SB 7072 from going into effect. Last year, the Northern District of Florida issued an injunction, ruling that the law … END_OF_DOCUMENT_TOKEN_TO_BE_REPLACED