Since taking effect, Marsy’s Law has caused confusion among those responsible for records requests and those seeking records. The constitutional amendment, approved by voters in 2018, enumerated specific rights to victims of crimes, including the right to “prevent the disclosure of information or records that could be used to locate or harass the victim or the victim’s family.” Fla. Const. Art. I, 15(b)(5).

While the amendment enumerated rights, it did not mention how victims’ rights would be enforced or when the rights attached. Law enforcement agencies began applying the law differently. As the Tampa Bay Times reported after the law took effect in 2019, the Hillsborough County Sheriff’s Office and Tampa Police Department automatically redacted victims’ names from public records whereas the sheriff’s office in neighboring Pinellas County did not withhold the information unless a victim requested confidentiality.

Accordingly, the rights of victims depend on where a crime takes place and which agency has jurisdiction. Who, or what, is considered a victim is contingent on the location of a crime. In a state where every person has a constitutional right of access to information, the amount of information provided may depend on the zip code of a crime. 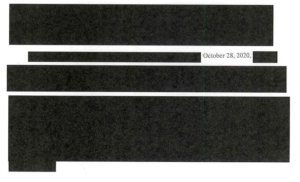 More than two years since the amendment took effect, the First Amendment Foundation tried to find out how law enforcement agencies across the state applied Marsy’s Law. More specifically, FAF wanted to know how many agencies automatically withheld information about a victim and how many required a victim to request confidentiality. FAF also sought to determine how many agencies applied Marsy’s Law to withhold the identity of a law enforcement officer accused of shooting a suspect or using force against a person. FAF interns submitted public records requests to sheriff’s offices and police departments for copies of the agency’s policies on Marsy’s Law, both general policies and those specifically applied to law enforcement officers. A review of the records sheds light on ambiguities of the law and interest in legislation clarifying the law.

Is the right to prevent disclosure automatic?

Nearly sixty percent of agencies did not include records indicating whether a victim must request confidentiality or did not respond as of this writing. More than 40 agencies provided a brochure or assistance information given to crime victims and witnesses. Yet, some of these brochures did not explain whether victims must request confidentiality. Several sheriff’s offices responded with a legal alert from the Florida Sheriffs Association noting that it is unsettled whether a victim must invoke confidentiality.

At least two dozen agencies provided a form victims must sign to request that their information be withheld. Around thirty-seven percent of agencies indicated that a victim must request confidentiality. Less than five percent provided records demonstrating confidentiality would automatically apply.

To review responses received as of September 28, 2021, view this chart: Marsy’s Law.

Who is a victim?

Agencies differ on who or what can be a victim. Two agencies reasoned that a victim must be an individual or person. A training PowerPoint slideshow provided by Citrus County Sheriff’s Office (CCSO) states that a victim must be an individual. As an example, CCSO explains that no Marsy’s Law form is necessary if someone shoplifts from Publix because the store is a corporation and there are no known individual victims. Similarly, a legal bulletin produced by the Hillsborough County Sheriff’s Office opines that because the amendment uses the term person, corporations are not included, and corporate information can be disclosed.

Two agencies reached the opposite determination. A Broward County Sheriff’s Office training bulletin and Sarasota County Sheriff’s Office order both state without elaboration that corporate entities are victims. The differences further illustrate the ambiguities of Marsy’s Law and need for clarification. A journalist reporting on thefts in Citrus and Hillsborough counties may receive more information about the crimes than a reporter in either Broward or Sarasota counties. A reporter in Crystal River or Tampa may be able to identify whether there is an increase of thefts at specific stores in a certain neighborhood. The public can identify where crimes are taking place in their community. Meanwhile, people living in Broward or Sarasota counties would only know that something happened somewhere.

In response to requests for an agency’s policy on applying Marsy’s Law to officers, many agencies provided the Doe v. City of Tallahassee opinion, in which the First District Court of Appeal ruled that Marsy’s Law could be used to withhold the names of officers who shot and killed suspects while on duty. Yet, as noted by an attorney for the City of Orlando in an email provided to FAF, the decision leaves many questions unanswered. For instance, questions remain whether it applies to charges of resisting arrest with violence or traffic violations if a driver crashes into an officer’s car. Orlando and Seminole County records assert protection would not apply to resisting without violence while Gainesville Police stated it would.

Some agencies acknowledged that the application of Marsy’s Law to an officer is a fact specific question. An investigator for the Chipley Police Department said the agency is working on updating its policies and procedures but noted that it would be case dependent because “an officer accepts certain risks by working this profession.”

Even after the appellate court’s decision, at least one agency, Polk County Sheriff’s Office, noted in an email that Marsy’s Law would apply only if a deputy was a victim unrelated to his or her occupation as a deputy. The Polk County Sheriff’s Office Communications Director stated that it has been the agency’s practice to release the names of deputies unless another exemption exists, such as protection for undercover deputies.

Law enforcement records reveal that agencies looked to state lawmakers for clarifying legislation. Legal bulletins produced by agencies when the law took effect noted that many Marsy’s Law provisions are vague and open to different interpretations. An email sent to the Hernando County Sheriff’s records staff in 2019 explained that there are many “kinks that will need to be worked out by the legislature” and that many individuals have been “calling on lawmakers to refine the law through an implement bill.”

Calls for legislation are not limited to the confidentiality provisions. The Seminole County Sheriff’s Office provided a legal alert on L.T. v. Florida, another case from the First DCA in which the court determined that Marsy’s Law does not give a victim a right to participate as a party at criminal proceedings. The court explained that while Marsy’s Law guarantees victims’ rights, it fails to provide procedures to implement and enforce them. The alert, written by the Florida Sheriff’s Association, noted that the case “underscores the need for clarifying legislation.”

In sum, a review of law enforcement policies manifests the ambiguities of Marsy’s Law that persist today. As a result of the vagueness of the amendment, the rights afforded to victims and the process to invoke those rights differs across jurisdictions. Privacy is based on zip codes. Information withheld or disclosed to the public – and in turn information about crime and safety in a community – depends on the location of a crime. Access to information on law enforcement officers is contingent on the employing agency.

As early as 2019, law enforcement agencies noted the uncertainty of the law and looked to the legislature for clarity. Lawmakers have failed to enact legislation to implement Marsy’s Law. Legislation could provide clarity and consistency to victim’s rights and access to public information.

In addition, legislation could narrow the definition of victim. A broad interpretation of victim and information to harm or harass a victim has restricted information on crimes. Marsy’s Law has been used to withhold the names of banks that have been robbed and buildings that have been vandalized. A sheriff’s office withheld the name of a daycare after an employee was arrested for child abuse, citing Marsy’s Law. An overbroad definition of victim leaves the public in the dark about crime in the community.

Legislation should narrow the definition of Marsy’s Law to a person. A law should make clear that Marsy’s Law does not apply to buildings or businesses. A more precise definition of victim will properly balance a victim’s right to prevent the disclosure of information that could be used to harass him or herself and their family members with the public’s right to know.

TALLAHASSEE – Pamela Marsh, the First Amendment Foundation’s executive director, will become a full-time Visiting Professor of Practice at the University of Florida Levin College of Law for the … END_OF_DOCUMENT_TOKEN_TO_BE_REPLACED

The Eleventh Circuit Court of Appeals affirmed in part an injunction preventing SB 7072 from going into effect. Last year, the Northern District of Florida issued an injunction, ruling that the law … END_OF_DOCUMENT_TOKEN_TO_BE_REPLACED