The president of Fox News said on Wednesday that the cable news network is joining more than a dozen other media outlets in supporting rival CNN in its lawsuit against President Trump over the White House’s decision to revoke access for correspondent Jim Acosta.

“Fox News supports CNN in its legal effort to regain its White House reporter’s press credential,” Fox News President Jay Wallace said in a statement. “Secret Service passes for working White House journalists should never be weaponized. While we don’t condone the growing antagonistic tone by both the President and the press at recent media avails, we do support a free press, access and open exchanges for the American people.”

In its complaint, filed in U.S. District Court on Tuesday, CNN argued that the revocation of Acosta’s access was “the culmination of years of hostility by President Trump against CNN and Acosta” based on the media outlet’s reporting and “an unabashed attempt to censor the press and exclude reporters from the White House who challenge and dispute the President’s point of view.”

In response, the Justice Department argued in a court filing that Trump has “broad discretion to regulate access to the White House for journalists.”

Wallace said Fox News intended to file a formal brief in support of CNN with the court ahead of an afternoon hearing.

During a press conference at White House last week, Trump berated Acosta when he challenged the president’s assertion that a caravan of Central American migrants making its way on foot through Mexico to the U.S. border represented an “invasion.”

Acosta tried to ask a follow-up question as a White House intern tried to grab his microphone but was told by Trump, “That’s enough.” 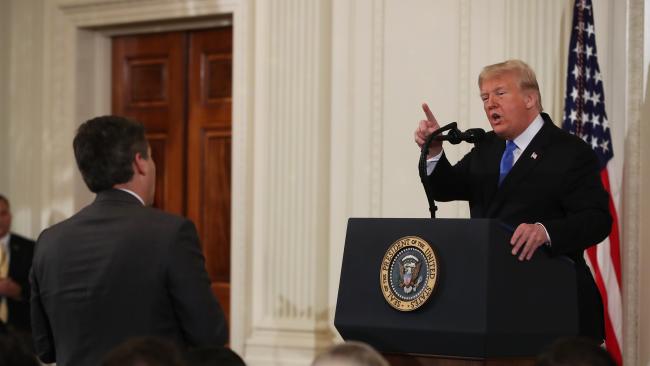 Following a question about his characterization of the migrant caravan, President Trump engaged in a heated exchange with CNN’s Jim Acosta, saying, “CNN should be ashamed of itself having you working for them. You are a rude, terrible person.” The verbal sparring continued into the next question from NBC’s Peter Alexander.

Position Summary: The Florida First Amendment Foundation (FAF), the state's leading advocate for open government, seeks a dynamic professional to lead the nonprofit as it embarks on significant … END_OF_DOCUMENT_TOKEN_TO_BE_REPLACED

Statewide, complaints are now viewable in near real-time.  This access method might be helpful to journalists and members of the public trying to obtain access to newly-filed complaints.  You’ll need … END_OF_DOCUMENT_TOKEN_TO_BE_REPLACED

TALLAHASSEE – Pamela Marsh, the First Amendment Foundation’s executive director, will become a full-time Visiting Professor of Practice at the University of Florida Levin College of Law for the … END_OF_DOCUMENT_TOKEN_TO_BE_REPLACED

The Eleventh Circuit Court of Appeals affirmed in part an injunction preventing SB 7072 from going into effect. Last year, the Northern District of Florida issued an injunction, ruling that the law … END_OF_DOCUMENT_TOKEN_TO_BE_REPLACED