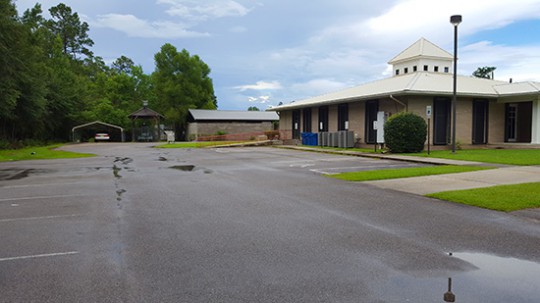 The four individuals accused of violating Florida’s Sunshine Law won’t be prosecuted, but the State Attorney’s Office remains steadfast that a violation occurred and has the put the Town of Century on notice.

The former members of a Citizens Advisory Task Force — Alfonzie Cottrell, Helen Mincy, Sylvia Godwin, and Robert Mitchell — previously pleaded not guilty to a noncriminal violation of the Florida Government in the Sunshine Law. They were charged by the State Attorney’s Office with having a public meeting that was not properly advertised. On July 26, a meeting was advertised in a legal notice to begin at 4:00 p.m. The meeting was actually held at 2:00 p.m., preventing the public from attending.

If convicted, each defendant faced a maximum fine of $500.

Each defendant has signed a deferred prosecution agreement with the State Attorney’s Office under which charges will be dropped if the defendant has no violation of the law  and resigns their position on the Citizens Advisory Task Force or completes an online training course regarding the Sunshine Law. If the individuals meet the conditions, the charge will be dropped in six months. The State Attorney’s Office said any fees or costs in connection with the case will also be waived.

In letters from defense attorney Kim Skievaski to Century Mayor Freddie McCall and the Century Town Council, each of the four task force members resigned their positions effective September 12. Skievaski was hired by by the town at $300 per hour to represent the four defendants.

At last Monday night’s meeting of the Century Town Council, McCall, reading from an email from town attorney Matt Dannheisser, said “the state will completely dismiss the charges….nor is there any suggestion much less an admission of guilt”.  In a paragraph of the email McCall did not read to his council,  Dannheisser said he would hold off until the agreement was formally entered into court records before the “issuance of any statement demonstrating that there was no violation in the first instance”.  He said he would meet with the prosecutor to understand his reasoning, and “unless he can convince me that he had a good basis for his action, I will issue a letter supporting the town and explaining that there was no violation and that was likely the reason the persecutor essentially dropped the charges.”

After being provided a copy of Dannheisser’s email, Assistant State Attorney Greg Marcille wrote a letter to Dannheisser calling his conclusions “incorrect”.

“There was a clear violation of the Sunshine Law by holding a public meeting at a time other than what was advertised in a public notice. The decision to dispose of this case by Deferred Prosecution was not based on the strength of the case but rather on mitigation circumstance. These circumstances, including the age of the individuals, their agreement to resign from the Citizen Advisory Task Force, and the considerable responsibility of the Town of Century in allowing the violation to occur, convinced this office that Deferred Prosecution was appropriate,” Marcille wrote.

“The Office of the State Attorney has always taken a strong position regarding the enforcement of Florida’s Government in the Sunshine Law and Florida’s Public Records Law. We will continue to take this position in the future,” the assistant state attorney concluded.

“It is also apparent that the members of the Citizens Advisory Task Force were not sufficiently educated as to their responsibilities under the Florida Government in the Sunshine Law. We recommend that the Town of Century immediately establish training programs for all individuals serving on Sunshine boards or committees. We recommend that an outside agency such as the First Amendment Foundation be used for the training. [READ MORE]

The First Amendment Foundation, a nonprofit organization dedicated to protecting and advancing the public’s constitutional right to open government, has a legal fellowship position available for 3L … END_OF_DOCUMENT_TOKEN_TO_BE_REPLACED

Child welfare authorities’ refusal, for well over a year, to hand over documents detailing the state’s failed efforts to protect a Miami toddler will cost Florida taxpayers $376,665 — money that … END_OF_DOCUMENT_TOKEN_TO_BE_REPLACED

Position Summary: The Florida First Amendment Foundation (FAF), the state's leading advocate for open government, seeks a dynamic professional to lead the nonprofit as it embarks on significant … END_OF_DOCUMENT_TOKEN_TO_BE_REPLACED